Sometimes a TypeScript monorepo aliases setup can look like a walk through the minefield. Give me your hand to walk through it together.

In this article, we consider path aliases as an integral part of any monorepo. We skip the configuration details. Instead, we going to focus on discovering the issues TypeScript aliases cause.

Although a monorepo with pure JavaScript packages is a pleasant adventure, things can get worse when we need TypeScript on board.

Before getting started, make sure that you've got a basic understanding of:

Let's assume that in the first milestone we've to build the app that:

In the future we have to add more features:

Basing on the above requirements, I claim that monorepo is a good solution. Let's design it!

The core element of any monorepo is package. Our monorepo would contain three packages:

The current structure gives a flexibility to fulfill all requirements we have.

Obviously, besides internal monorepo packages, we use external ones:

Having yarn workspace configured, we can run yarn install to generate symlinks in node_modules. Let's check it out:

Now that we created symlinks, we can import stuff from packages. For example, to import the Button component from @project/ui, we write:

As you can see, both imports include /src/ path. Traditionally, a lot of Front End npm packages offer imports without the /src/:

Technically, we can achieve this by creating a custom build process for each package. In the context of monorepo, this approach has some disadvantages:

As a better alternative, we can choose a path aliases solution. It requires a bit more configuration but offers a much better development experience.

Let's start the TypeScript journey. First, we need to define a path mapping:

The above configuration we place to tsconfig.json in the monorepo root folder. Later, we can extend tsconfig of any package. I think this is a beneficial and DRY.

As a result, TypeScript gets the "message":

Hey, TypeScript! Now, when I import a package let me use aliases instead of relative paths. Also, enable a source code navigation and remove import warnings in my IDE.

In the next step, we examine how to compile client and server code using aliases.

We going to use webpack to transpile a client-side code. There are a few options to inform webpack about aliases:

Luckily we use Next.js. The framework has built-in support for absolute imports and module path aliases. In that case, we don't need any extra configuration because Next.js uses tsconfig we already have.

Whoops! It seems like Button has been resolved properly. That confirms that Next.js aliases support work as promised.

However, webpack doesn't know how to preprocess files from the outside scope (../ui/src/). A webpack loader applied to these files has to solve the problem. We have two options there:

In the above example, the Next.js loader preprocesses files from the packages folder (../). Now, when we run yarn dev in @project/app, the development server works as expected:

Phew! That isn't so painful, right? In the next section, we'll see how to handle a unit testing topic.

How to make aliases be working with Jest?

Jest doesn't support aliases out of the box. Fortunately, we have some possibilities to make it working:

Although ts-jest is a straightforward and an obvious solution, the second one requires deep explanation:

In most cases, we use babel-jest to compile JavaScript/TypeScript in Jest. Because of this, it's possible to specify aliases in the babel config file:

As you can see, the solution is not DRY, because we need to specify path aliases one more time. While we stick with this approach in our examples, you can use ts-jest on your project. The decision is up to you.

Hooray, the second stage passed! Don't relax. The minefield is in front of us :)

Before start, check the server implementation. The server does only a simple routing and logging.

Let's assume this is a way how we use path aliases on server:

Although there is no usage difference between server and client-side, there are configuration differences.

If we run ts-node we get the error:

Ouch! That's not cool. But I have an idea of how to find the reason of the issue. Let's try to compile a TypeScript code using tsc. I promise you will understand in a moment why we do this. To get a production server build we have to execute the build command:

Analyzing the dist folder output and line 9 of index.js we can claim about:

The last point is the root of all evil. That's why we get an error running ts-node. The same happens when we run the compiled production code using Node.js.

I hope it gets clear now. Let's deep into some details.

There are no plans to change the above behavior ( roadmap, issue 1, issue 2, issue 3 ). As a result, TypeScript has no built-in support for aliases.

If it doesn't make you happy, read further.

How to make aliases work in Node.js runtime with the TypeScript app?

In this part, we going to learn how to:

There are a lot of different workarounds on how to solve the problem. However, we consider only marked ones:

This solution relies on using tsconfig-paths in development and production. The package does the simple thing:

... loads modules whose location is specified in the paths section of tsconfig.json

To make it working in development we have to preload tsconfig-paths at ts-node startup:

You can expect the following behavior with and without -r tsconfig-paths/register:

To ensure the best performance on production, the ts-node usage has to be avoided. Instead, we've to compile TypeScript code to JavaScript and run the server using Node.js. It means that tsconfig-paths has to be preloaded at node startup. But how to include tsconfig if node doesn't accept the --project option?

As you can see, baseUrl differs from the one in tsconfig.json. The reason is a different output destination of the production server (dist/app):

Now, we have to preload tsconfig-paths-prod.js before Node.js startup.

TypeScript has a wonderful feature called "project references". Using the feature we can inform TypeScript:

Hey typescript, when I call you to compile a project, check the references field in tsconfig. Based on this, build the project and packages it refers to.

In our case, @project/app package has a single reference - @project/utils. To set it up, extend tsconfig.json:

The next step is to add tsconfig.json to utils package:

Also, it needs to adjust the build command in @packages/app:

The purpose of a --build flag is:

Builds a project and all of its dependencies specified by project references.

In our case, the build produces dist folders in @packages/app and @packages/utils packages: 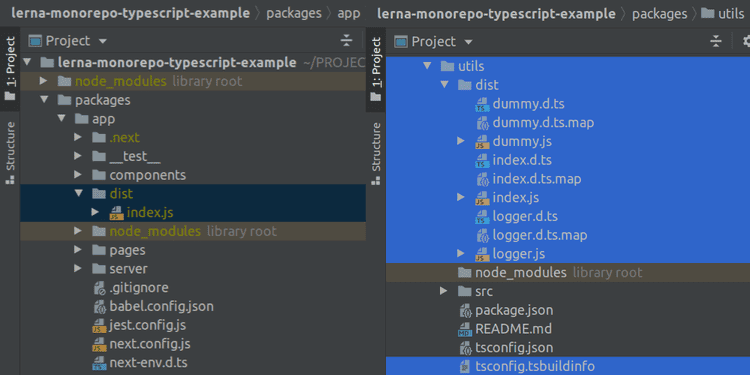 Turn attention to @packages/app dist folder. A project references usage cause the utils folder excludes from dist. That's nice because now we get only @packages/app files.

Now, we have to specify an entry point of compiled files in @packages/utils (packages.json):

This solution allows us to import module like this:

When we run the production server, node.js do the following to resolve files:

Lerna has a lerna run command. It runs npm script in each package that contains it. Because of this, the idea is to specify its build process for each package. Also, in the monorepo root, we can add the Lerna script that builds all packages we need.

First, let's create the Lerna script that builds @package/app and @package/utils. The good naming for this could be app:build. Now, look what happens when we run it:

As a result, we get the output:

To run the production server, we need to add and execute the following script:

In my opinion, it's a good idea to use path aliases in monorepo. It saves us from refactoring when we move files, change the structure, etc.

On the other hand, a aliases configuration process can be complex and time-consuming. In fact, to set up aliases in the real world project we need:

Unfortunately, there is no silver bullet that can handle all these cases.

Do you like the article or have some remarks? Let's start a discussion!